PREPARE TO GET WET!! Those were the instructions I gave a dozen spirited boys in April, when we cast them in our NETILAS YADAYIM film for Torah Live. This would be the first scene of our new film, and we were going to start with a real splash - filming a dozen boys up north in Israel’s beautiful Sea of Kinneret.

Who wouldn’t love that? Be in a movie and get wet too. 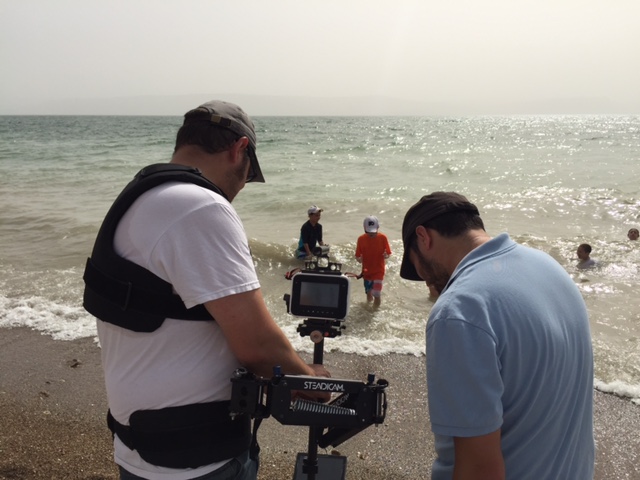 As production manager of Torah Live’s films, I do anything needed to prepare a movie (props, costumes, location logistics, communication with our cast, anything), and advance the production, so that we can hear that famous call, “Action!”

With the most state-of-the-art techniques, Torah Live films teach all kinds of topics in Judaism in an exciting way, and also introduce beautiful, and extra-special places throughout Israel to the world. There are few places as beautiful as the Kinneret.

When I put out a call for nine to eleven year olds to create our “class,” I guaranteed the boys a great time. That was easy to do, because Torah Live location shoots are not just educational, they’re fun team efforts. (Think Outward Bound Junior.) Everyone has to work together to make the day’s shoot a success, and that generates great feelings all around. This chapter of the Netilas Yadayim (washing our hands) film, would teach others how to wash hands while on a tiyul.

We planned for a wonderful day outside in the sunshine, April 21 - a day of hiking, picnicking and playing on the shores of the Kinneret. We were all excited. Blue skies ahead…until forecasts suddenly changed.

When you film a movie at an outdoor location, you don’t only worry about your script, your actors, your props. You’ve got to follow the weather very closely. And so we did. A few days before our premier shoot on Netilas Yadayim, weather forecasters predicted clouds (we were still going), possibly rain (we were going, because maybe they’d be wrong) and finally storms! We conferred back and forth for hours about the real possibilities of being rained out of our first scheduled day of filming.

We all wanted to go forward, but we couldn’t risk the health and safety of a dozen children. We couldn’t ask them to jump into a freezing Kinneret or even play on the beach if the weather was stormy. Sadly, we postponed Day One of our production. Happily, our decision was right, because the heavens gushed fiercely, and the entire North teemed with showers.

Netilas Yadayim forged ahead with other exciting shooting days - the Mount Zion Hotel, Machon HaMikdash (The Temple Institute), the Old City of Jerusalem, Israel’s International Airport and Tel Aviv’s gorgeous City Tower. We rescheduled the Kinneret shoot with our dozen boys, and again, just before filming, we had technical difficulties and had to reschedule.

We were sorry we had lifted the hopes of our young actors, only to dash them again, so I decided to give them a treat. I took the gang out for pizza. Some of the boys brought netilas yadayim cups, and they lunched on pizza and ice cream, while discussing the different laws of netilas yadayim (not kidding!!). The boys were really interested in the topic by now, had great things to say, and couldn’t wait to join in the filming, even though it meant they’d have to miss a day of school (well, this was a different kind of learning experience). Even the parents were enthusiastic.

Finally, B”H, we were able to reschedule the Kinneret shoot. It was more than a month later, and now instead of the first day of filming, it would be the last. Our actors were such troopers, they all signed on once again.

Bright and early, towels and snacks in hand, our actors arrived. By now, they really were a team, psyched up for the trip ahead, and eager to learn about Netilas Yadayim.

What do you do if you're hungry on a tiyul and don't have water to wash with? What if you're at a lake with tons of water, but you have no washing cup? Why do we have the mitzva of Netilas Yadayim today?

Torah Live’s Rabbi Dan Roth and director Ben Katz explained to the boys how we would teach other children the answers to these questions. They asked their own questions, they answered Rabbi Dan’s. They were totally involved.

They learned PATIENCE. Most people think making a movie is all fun (it is), but it takes a lot of patience. You have to wait a very long time until the camera is set up. Then you have to do a scene again and again and again until everything is just right. (Believe me, that’s only fun the first three times…)

They learned COOPERATION. We filmed them on the bus during the entire ride up North. They were teamed up in every scene, and had to work together to make it right. They shared snacks. They shared games. They shared stories and laughter. 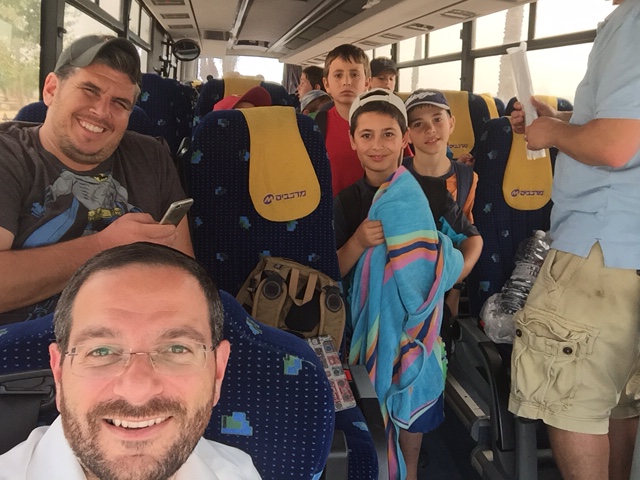 Through the seven weeks of plans and cancellations, they learned to deal with DISAPPOINTMENT. They had great attitudes, most probably with the help of their supportive parents.

They learned that SUCCESS is a combination of doing the job right, reaching your goal, and helping one another make it happen.

Finally came the moment they had been waiting for. After six takes of dismounting from the bus, and another four takes of running toward the Kinneret, they were finally allowed to jump in. We watched them splash and shout and swim. Our PA Menachem Katz swam with them, while director Ben Katz (no relation) and I stood by the shore watching with 1000 eyes on these 12 very energetic boys. 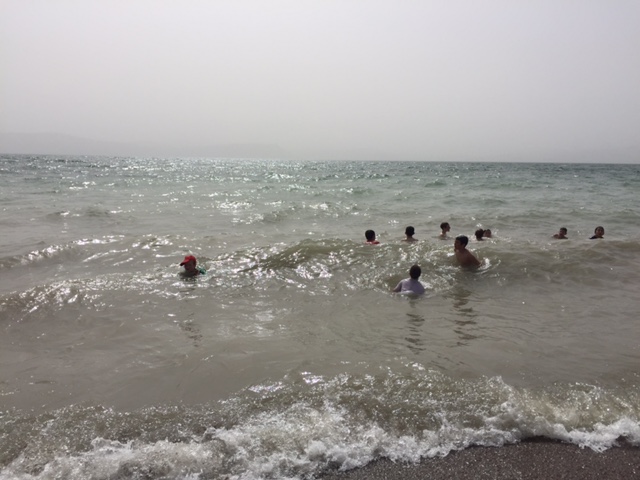 On the way back Rabbi Dan gifted each of the boys a DVD on TEFILLIN, which we’re sure they’ll find very helpful and necessary in the next few years.

After two months of planning and anticipation, TORAH LIVE succeeded in making our Kinneret shoot happen. We had fun. We made new friends. We noshed and joshed. We had interesting experiences. And  most of all, we all feel great, because now tens of thousands of Jews around the world will have a better understanding of the laws and varied situations concerning the mitzvah of Netilas Yadayim, and we all had a part in that.