Torah Live has filmed all over Israel – the highest mountains, the most arid deserts, the bluest sea, and the busiest cities.

For our upcoming feature, “Live to Give,” an exciting film that teaches chesed on a totally new level, we needed to shoot a scene in the Golan. No problem for us. We’ve been to the Kinneret, and the Golan is only a bit farther. But we had an added challenge.

On the same day, we had to film in a specific vehicle on a green screen in Greater Jerusalem, so we couldn’t hop into our cars and head up north. Instead, we decided to create the Golan somewhere nearby. 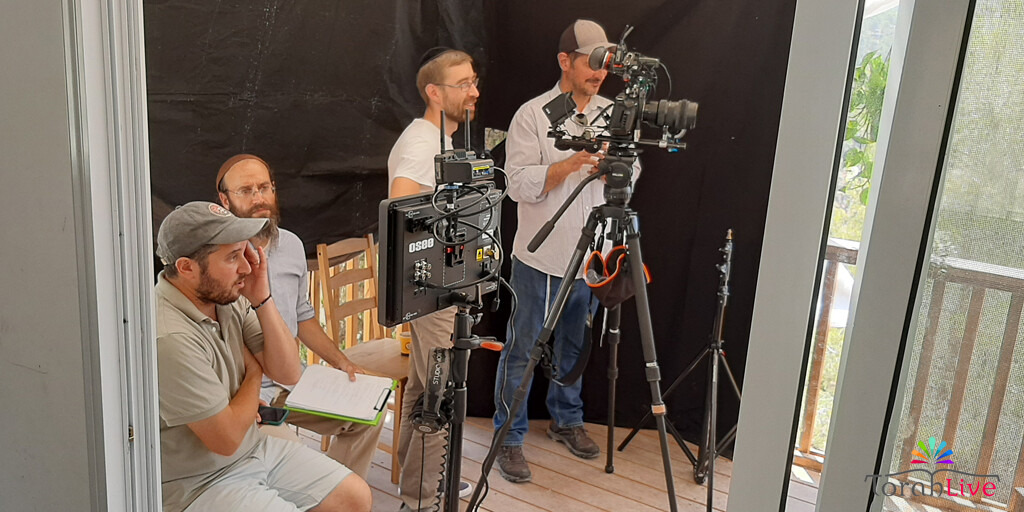 Now, when you think of the Golan, what are the first things that come to your mind? Big skies, big forests, big wide open spaces. A big beautiful landscape. We needed to find some trees, but not just some trees, a screen-saver forest full of trees.

We checked out Lapid (near Modiin) and Tzur Hadassa (on the way to Bet Shemesh). They certainly have trees aplenty. Then Shoshi Tenenbaum, our prop magician for previous films, told us about a new overlook in her own community up in the hills of Gush Etzion. And one of our popular Torah Live actors, CB Davies, mentioned the same overlook.

Not five minutes later, I drove right there. Climbing on to the balcony, I was mesmerized by the lush giant trees at attention all around me. More than that, the balcony was so high on the side of the mountain, the very tips of these colossal trees were at my feet. I was king - okay - queen of the mountain.

I photographed every aspect of the location and sent it to our team. They loved it. We got the permission of the security team and the head of the village to film there, and we were set.

Director Ben Katz and actor Daniel Deutsch review the scene, as they look over the stunning "Golan" landscape in Gush Etzion.

Our crew arrived at the location that had seemed so perfect. We looked around, a majestic forest at our feet, the cloudless sky above our heads. Perfect. Or so I thought.

Too much wind. The crew balanced precariously on the porch railing to hang wind breakers. Too much sun. They covered the pergola with shade netting. Too much glare. They rigged black walls to fight the glimmer that dazzled me, but bothered the camera. Not enough greenery on this green mountainside. We hung dangling plants.

Our beautiful balcony had become a little box with an opening only for our actor, and that’s just the way we wanted it. We stood up against nature with as many contraptions as we could until we got the perfect shot.

And that’s what you’ll see in our “Golan” scene. A panorama of green all around. A beauty that will seriously take our viewers’ breath away.

“Live to Give” is written by Elchanan Schnurr, directed by Ben Katz, produced by Marty Weisel, DP Sasha Gorev, production manager Sharon Katz. It is part of the new Chesed course.