The beloved larger-than-life personality Rabbi Siddur has been a Torah Live superstar since he first popped out of a 100-year-old prayer book on the set of Emunah and Tefillah five years ago. He charmed bar mitzvah boy Josh and encouraged him to look deeply inside and discover the important values of life. He has gone on to star in Torah Live’s animated features over the past three years, and has guided viewers around the world on subjects like Individuality, Being Happy, Friendship, Gratitude, Patience and Inclusion. 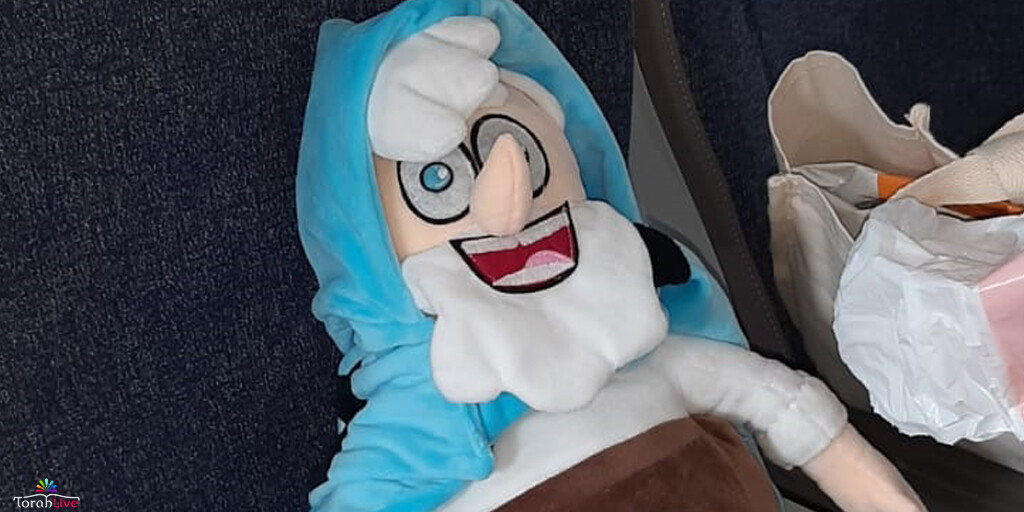 An animated character created by talented artist and illustrator Ronen Zhurat and voiced by the inspirational and hysterically funny Rabbi Dovid Orlofsky, Rabbi Siddur may be small in size, but is tremendous in the influence he has on anyone who watches him.

With all this in mind, Rabbi Roth thought it was time to introduce Rabbi Siddur in a new way – out of the reel world and into the real world. Thus began the adventure of creating a Rabbi Siddur doll to appear in some of our upcoming non-animated videos.

After researching many doll manufacturers, we chose Budsies, a company renowned for its customized dolls and puppets. We decided on a totally plush doll, no rubber faces, and no realistic elements. Rabbi Siddur is an animated character and we wanted to retain his whimsical nature, especially as a doll.

Budsies assigned two designers to our Rabbi Siddur project. They wanted to know all they could about Rabbi Siddur, both his physical appearance and the meaning and importance of the character. We described Rabbi Siddur’s physical attributes from the top of his blue tallis to his cartoon character toes. Then we provided them with several character drawings by Ronen. We explained Rabbi Siddur’s funny personality and even sent them some videos, so that the designers could see him in action.

They chose fabrics that would be appropriate for our doll, drew patterns for each piece, hand-cut each element and even hand-sewed the pieces together. They stuffed the first prototype of Rabbi Siddur to plushify our design, and sent us pictures of Rabbi Siddur from every angle. OMGosh, he was adorable. Mesmerizing blue popping eyes. The happiest smile. His outgoing personality was evident, even in a doll.

But….his beard wasn’t fluffy enough, his trousers looked like superhero tights and his sleeves were too short.

As Wonderful as Possible

We sent detailed corrections several times to Budsies. Round the edges of Rabbi Siddur’s beard. Fluff it. More. Relax his trouser legs. Maybe he is a kind of superhero, but not one with blue tights (that’s another super fellow). And we guided the non-Hebrew-familiar designers to fix the Hebrew writing on the front of Rabbi Siddur’s prayer book. 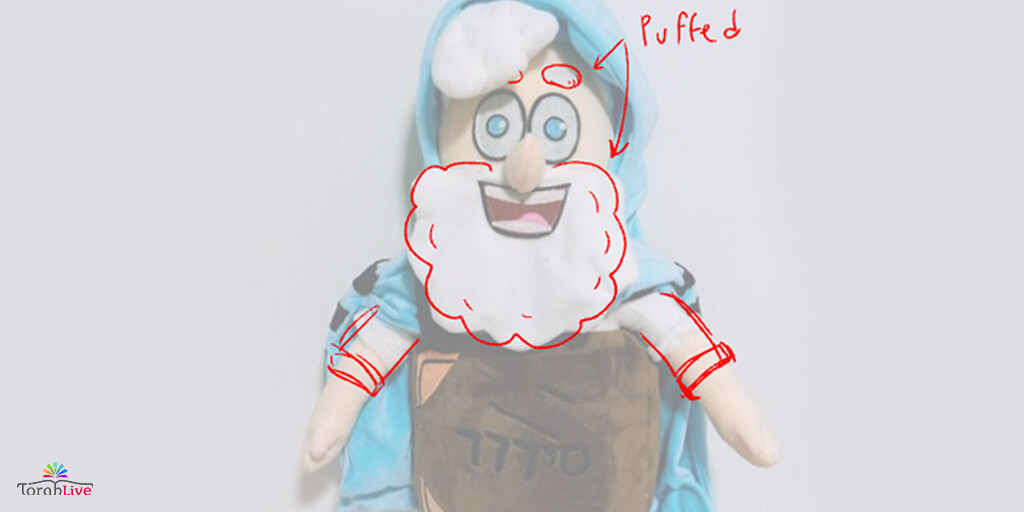 “How’s this?” “What about that?” The Budsies designers were total team players, sending photos the entire way through with every alteration. Our vision of Rabbi Siddur was coming to life right in front of our eyes.

Finally, we got the word. The designers, pattern makers and seamstresses had completed all their corrections and “without further ado... drumroll please...” they sent a photo of the completed doll. There was Rabbi Siddur. Yes, there he was! Wow. 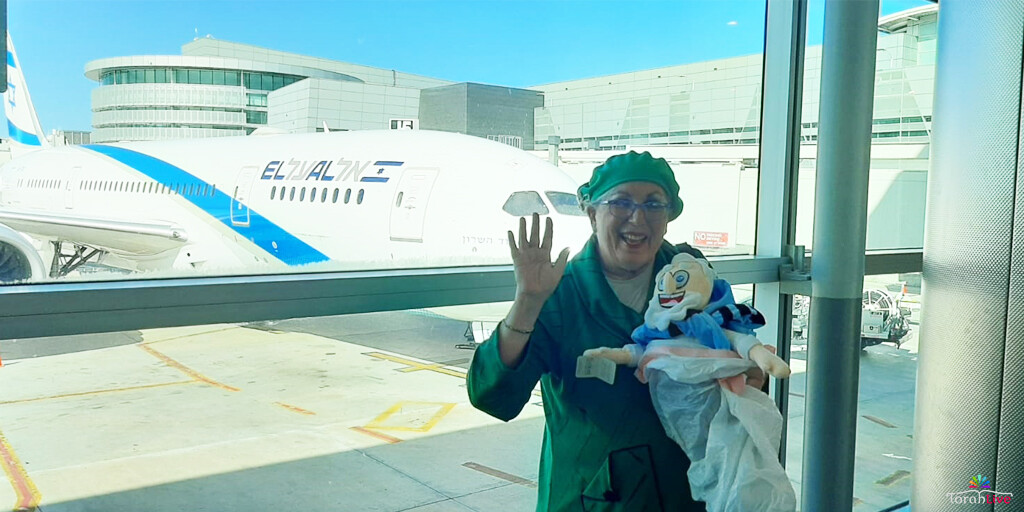 Budsies shipped our amazing incredible fantastic plush doll to an American address and, on a trip back from visiting my relatives, I had the privilege of escorting Rabbi Siddur home to Israel. When we boarded our El Al flight, the airplane crew was so excited to see one of the stars of their in-flight movies. They made sure Rabbi Siddur was comfortable throughout our flight, alone and protected in an overhead compartment. Some passengers even recognized him and asked to snap Rabbi Siddur’s picture. I was traveling with a celebrity! And I even photographed him watching his animated self on the screen. 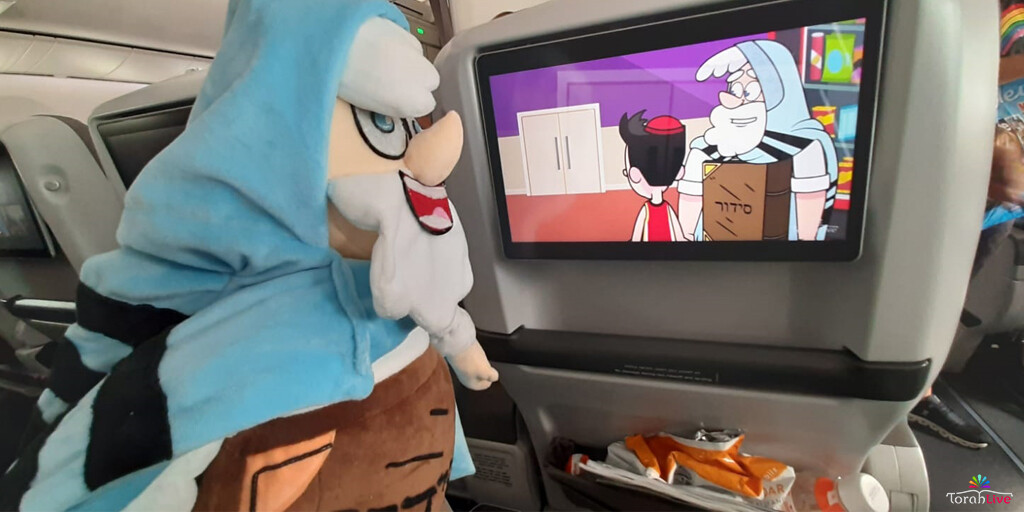 Rabbi Siddur is home now, waiting to meet our Torah Live team, and especially Rabbi Dan Roth. I cannot wait for that moment.